Polkadot claims a new yearly low. Where will the cryptocurrency go next? 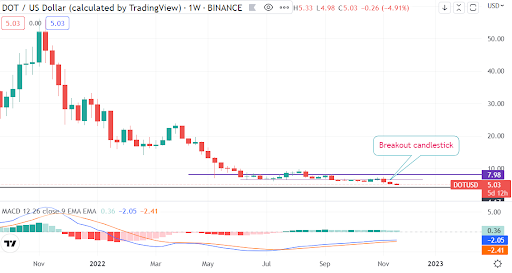 Polkadot (DOT/USD) could be headed to $4 next. That was after losing 3.5% on Tuesday to claim a new low in the year of $5. The cryptocurrency was trading in a clear downtrend, paving the way for further declines.

It should be noted that Polkadot has been seeing a surge in activity, a highlight that the platform is still a top choice. However, bears have none of it, as the price has gone in the opposite direction. That begs the question, why is this so?

It may be time to recognise the true essence of crypto – bringing onboard decentralisation. Platforms such as Polkadot have grown because of the key role they play. Thus, the previous gains in the native tokens have largely resulted from speculation. So, when risks set in, as it is currently, a bear market is bound to follow. Going by the risk-on sentiment, the current price dynamics of DOT show we need to prepare for a prolonged bear market.

A technical outlook of DOT shows that the bear weakness intensified after a breakout candlestick at $6. The cryptocurrency is trading with weak momentum. That has left a system of lower lows and lower highs on the weekly chart.

What next for DOT?

Following a break below $6, DOT could remain in a bearish market for a little longer. The area around $4 provided some price action and should be watched.

Where to buy DOT

eToro offers a wide range of cryptos, such as Bitcoin, XRP and others, alongside crypto/fiat and crypto/crypto pairs. eToro users can connect with, learn from, and copy or get copied by other users.

Binance is one of the largest cryptocurrency exchanges in the world. It is better suited to more experienced investors and it offers a large number of cryptocurrencies to choose from, at over 600.

Binance is also known for having low trading fees and a multiple of trading options that its users can benefit from, such as; peer-to-peer trading, margin trading and spot trading.

The post Polkadot claims a new yearly low. Where will the cryptocurrency go next? appeared first on CoinJournal.