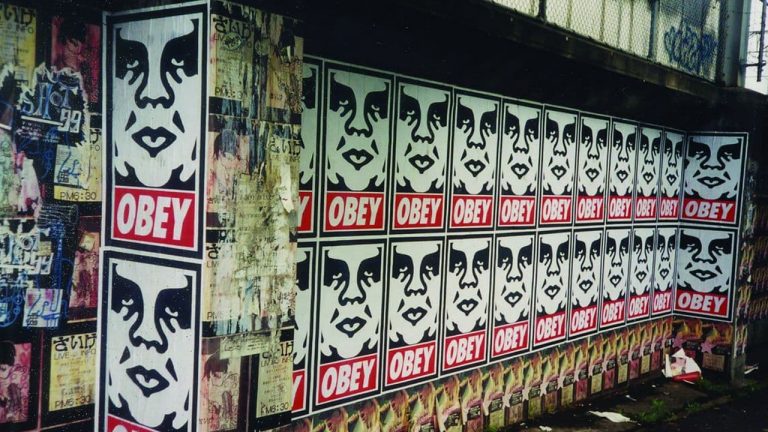 The iconic contemporary street artist, Shepard Fairey is getting into the non-fungible token (NFT) ecosystem with an NFT sale on the marketplace Superrare. The NFT mural called “Obey Ideal Power” created by Fairey will be auctioned on March 29, alongside a number of other artists selling NFTs like Neïl Beloufa and Petra Cortright.

Shepard Fairey is a well known street artist, illustrator, and activist who made a name for himself with his infamous “Andre the Giant Has a Posse” stickers. Fairey also created the iconic Obey images and the company as well that leverages the same name. Back in 2008, Fairey’s art went viral when he created his Barack Obama “Hope” poster. Now the legendary artist who was featured in a film with the notorious Banksy is getting into the non-fungible token (NFT) collectibles industry. Fairey has teamed up with Verisart and the NFT marketplace Superrare in order to join a star-studded list of artists auctioning non-fungible token art pieces.

Fairey will join nine more leading artists dropping NFTs certified by Verisart such as Michael Joo, Neïl Beloufa, Mark Titchner, Petra Cortright, Jonathan Yeo, and more. Fairey’s NFT is called “Obey Ideal Power,” and the mural will be auctioned via Superrare on Monday, March 29. A fraction of the proceeds from Fairey’s NFT sale will be donated to the human rights nonprofit Amnesty International.

The notorious street artist wholeheartedly believes that art gives power. “Art has power,” Fairey said about next week’s NFT auction. “I’m interested in using art to raise awareness for the important political and social issues of our time. Power has many forms and is embraced or feared depending on who that power benefits, who it oppresses, who it uplifts, and who wields it,” the activist added.

The Obey Ideal Power mural explores different incarnations of power and asks the viewer to consider the negative impacts of certain forms of power and the social and environmental benefits of other forms of power. For me, ideal power does not destroy the environment or corrupt democracy, but uplifts the oppressed, expands equality, cultivates peace, honors truth, and works in harmony with nature. Meanwhile, Fairey believes that his inaugural NFT sale bolstered by a Fair Trade art certificate is quite meaningful. “In an attempt to manifest the ideals I champion in my art in the real world, I will be donating a portion of the proceeds from this work to Amnesty International to support their important human rights efforts,” Fairey concluded. “Using the Fair Trade art certificate for my inaugural NFT sale, collectors will know what charitable cause the work supports.”