As the Federal Reserve appears to be poised to take a more hawkish stance on monetary policy (for now… maybe), especially in light of recent high inflation data, cryptocurrency investors seem to be rethinking how they’re allocating their money in the sector.

One would expect that to mean good news not just for the price of ether, the native token of the Ethereum network, but also for its layer 1 alternatives. Instead of a gold-like store of value (a chief value proposition for bitcoin), ether and its rivals represent bets on sophisticated platforms for building smart contracts, non-fungible tokens (NFTs), decentralized finance (DeFi) applications and other wizardry.

“That’s why you’re seeing ethereum really outperform bitcoin,” said Mike Novogratz, CEO of Galaxy Investment Partners on CNBC’s “Squawk Box” on Wednesday. “If you look at the ethereum price, ethereum still trades as bullish as can be. People see ethereum as a technology bet and bitcoin as a debasement of fiat currency bet.”

Thus, if the narrative is cooling on what seemed to be endless money printing by the Fed, investors who were bullish on blockchain technology may be looking to buy more assets beyond bitcoin.

The most established of these is, of course, ether, but with Ethereum transaction costs getting prohibitively expensive with the boom in NFTs, it would be no surprise if the market is looking for other networks that won’t break the bank on every transaction.

Ether has had an incredible run over the past few months.

Nonetheless, the 90-day correlation coefficient of bitcoin and ether is still a very high 0.84 and generally rising. That means they are increasingly moving in lockstep, though ether still outperforms bitcoin. 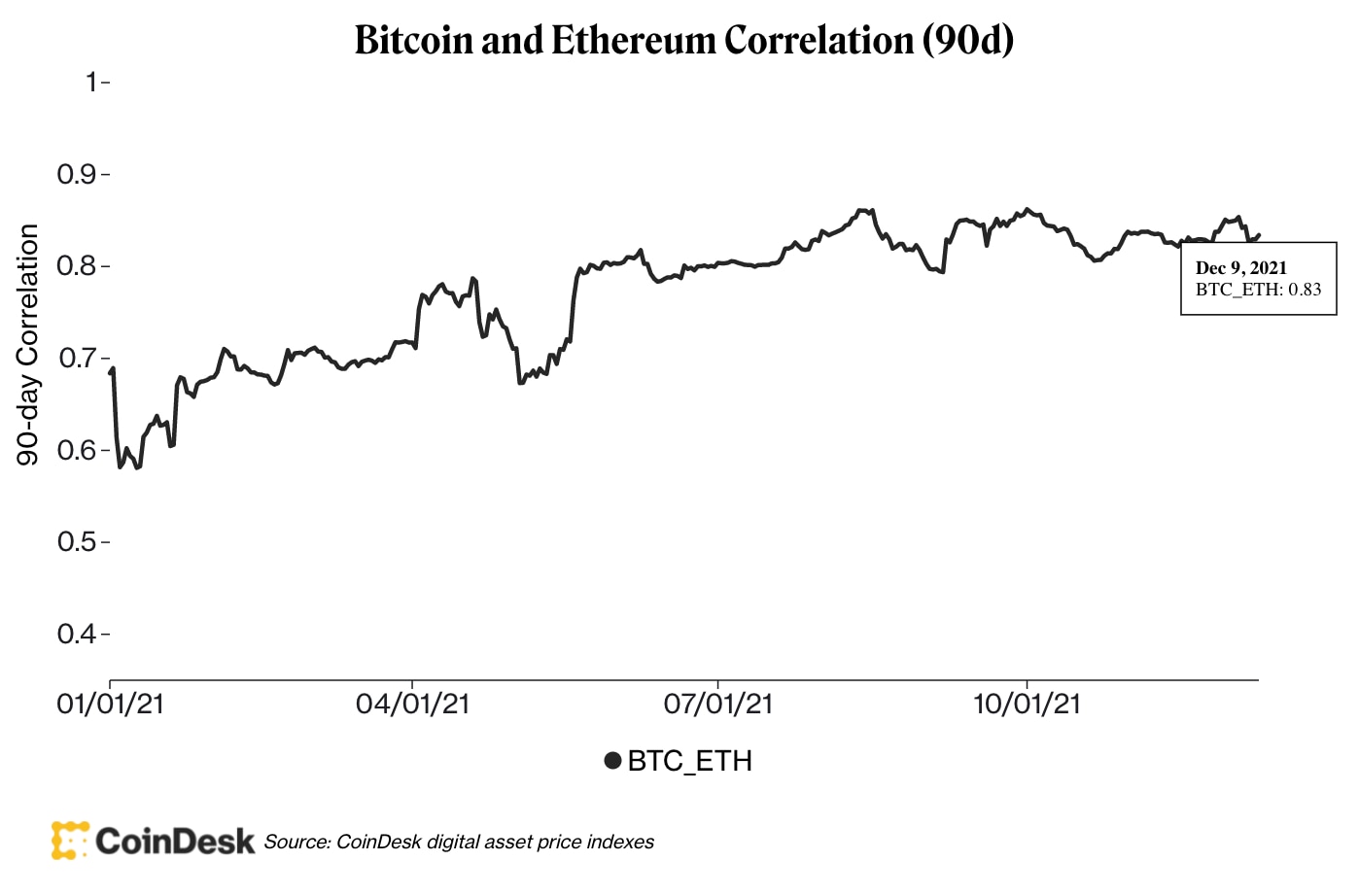 Some investors seeking an alternative to the king of alternatives are finding meaty returns on an absolute basis when it comes to some of the layer 1 tokens. (Layer 1 platforms are those that are independent blockchains, rather than layer 2 networks, which are built on top of one of the layer 1 blockchains).

“Intensifying development work, significant funding and growing use are behind a market rotation out of BTC and to a lesser extent ETH, into the tokens of platforms such as Solana, Avalanche and others,” wrote Noelle Acheson, head of markets insights at crypto market maker Genesis Trading, in her must-read November Market Review. (Acheson is a former editor of CoinDesk’s Crypto Long and Short. Genesis Trading is owned by Digital Currency Group, CoinDesk’s parent company.)

Year to date, the native tokens for Avalanche, Cardano, and Solana have shot up so high… 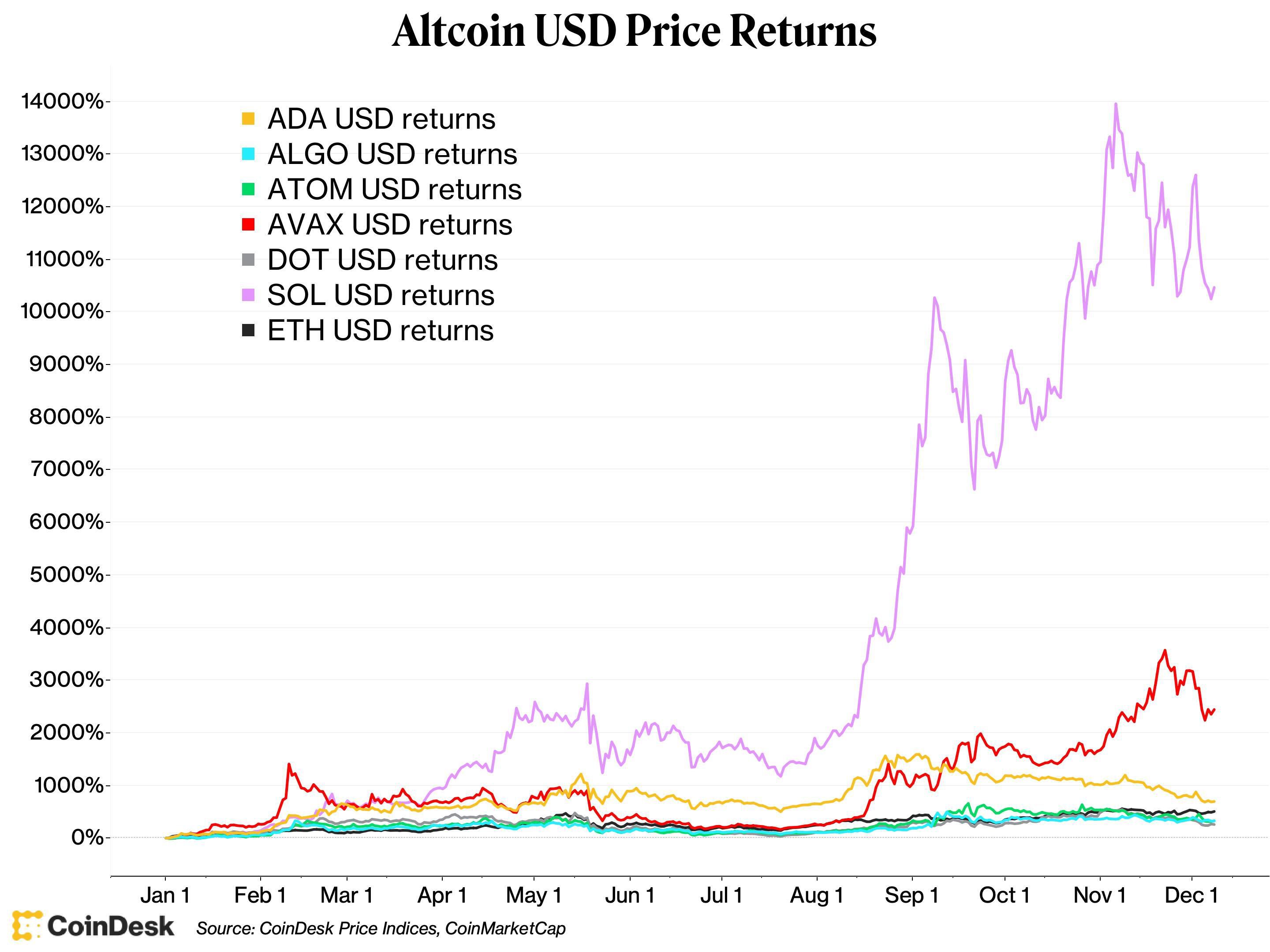 …that the only way to see other layer 1 token returns would require a logarithmic chart. Those three have beaten ether when denominated in bitcoin. 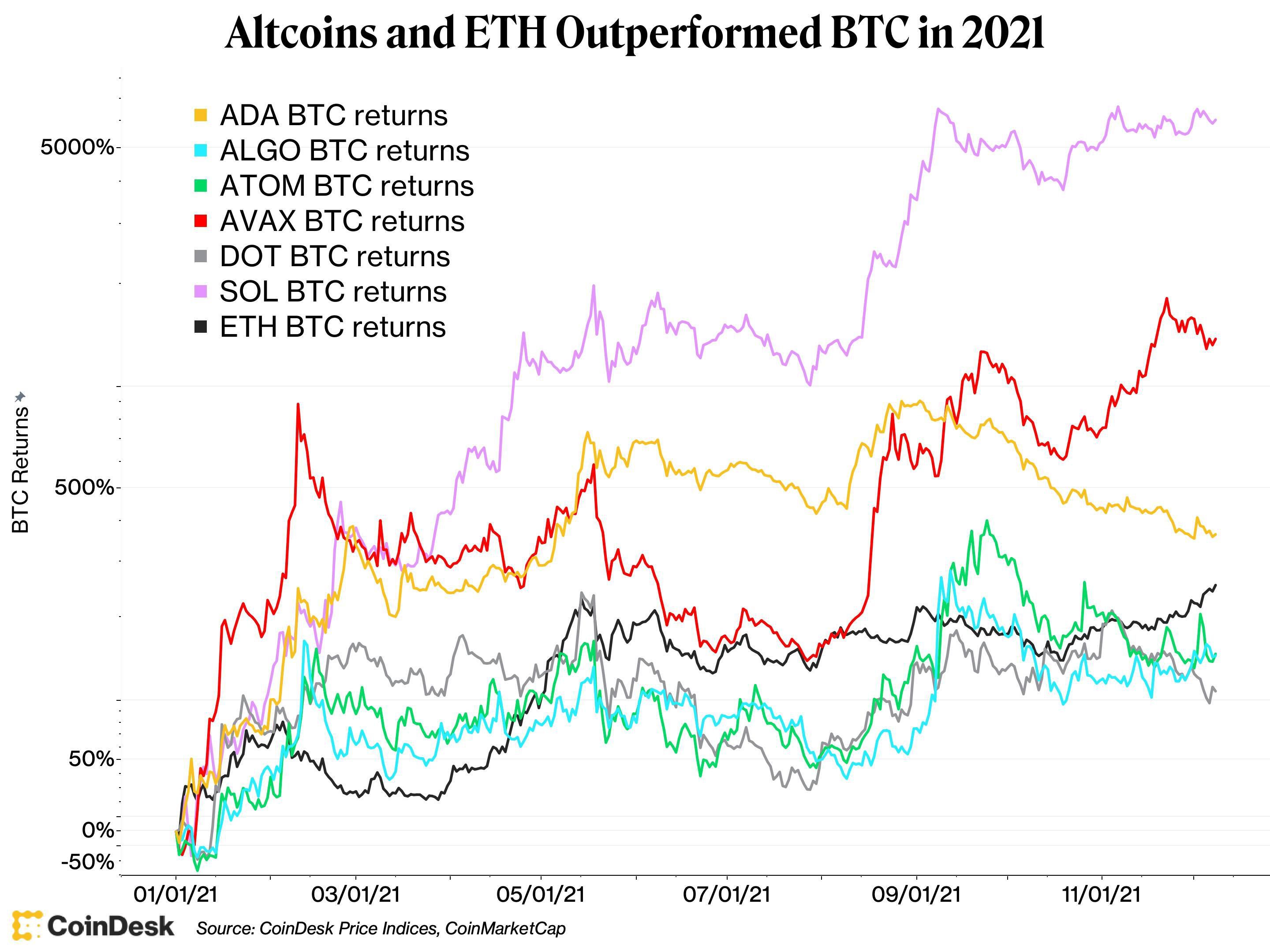 Meanwhile, the tokens powering Algorand, Cosmos and Polkadot are down since the start of 2021 when pricing those currencies in ether. 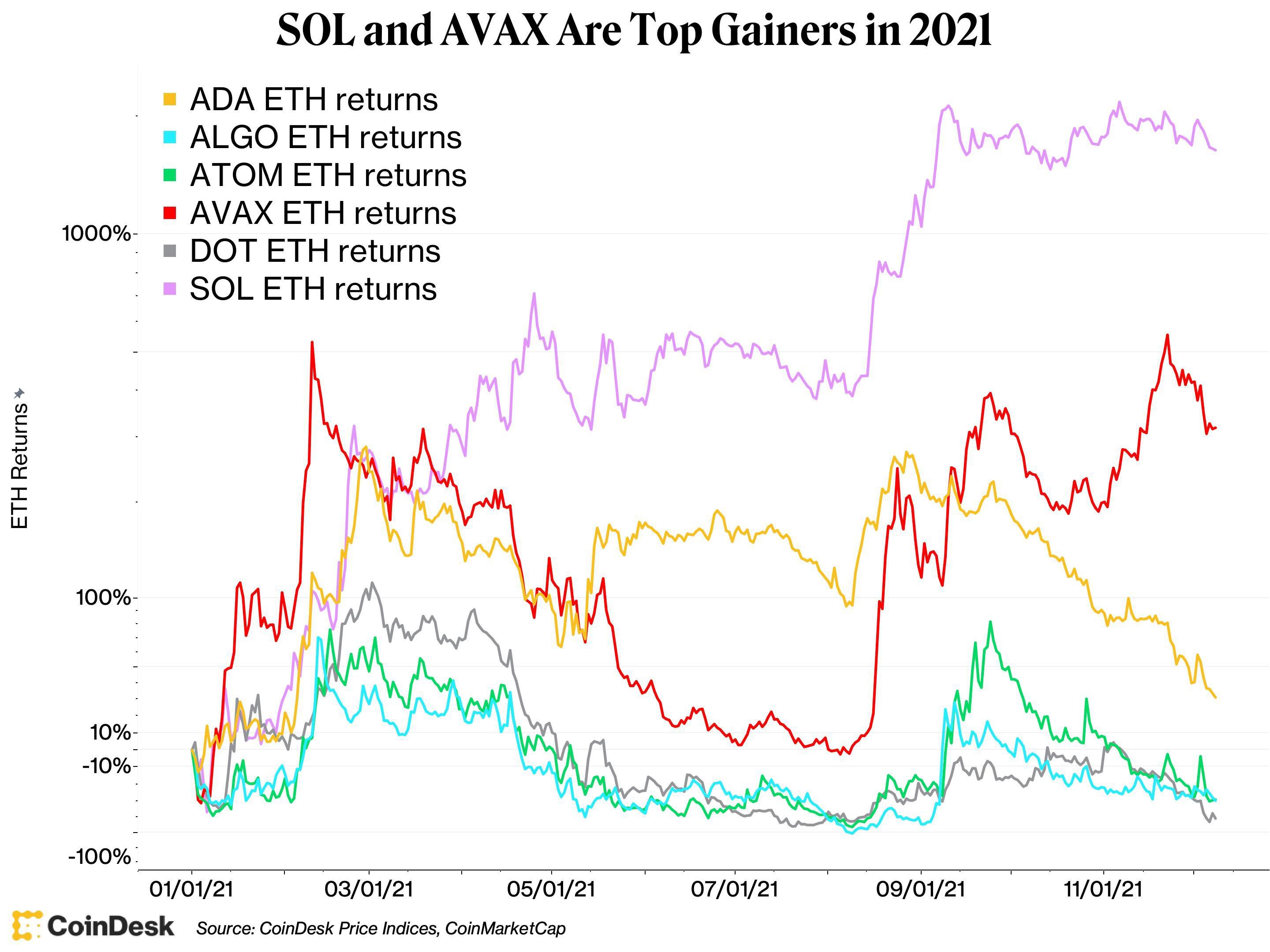 Yet since the “Black Friday” sell-off on Nov. 26, only Algorand’s ALGO is in the black. 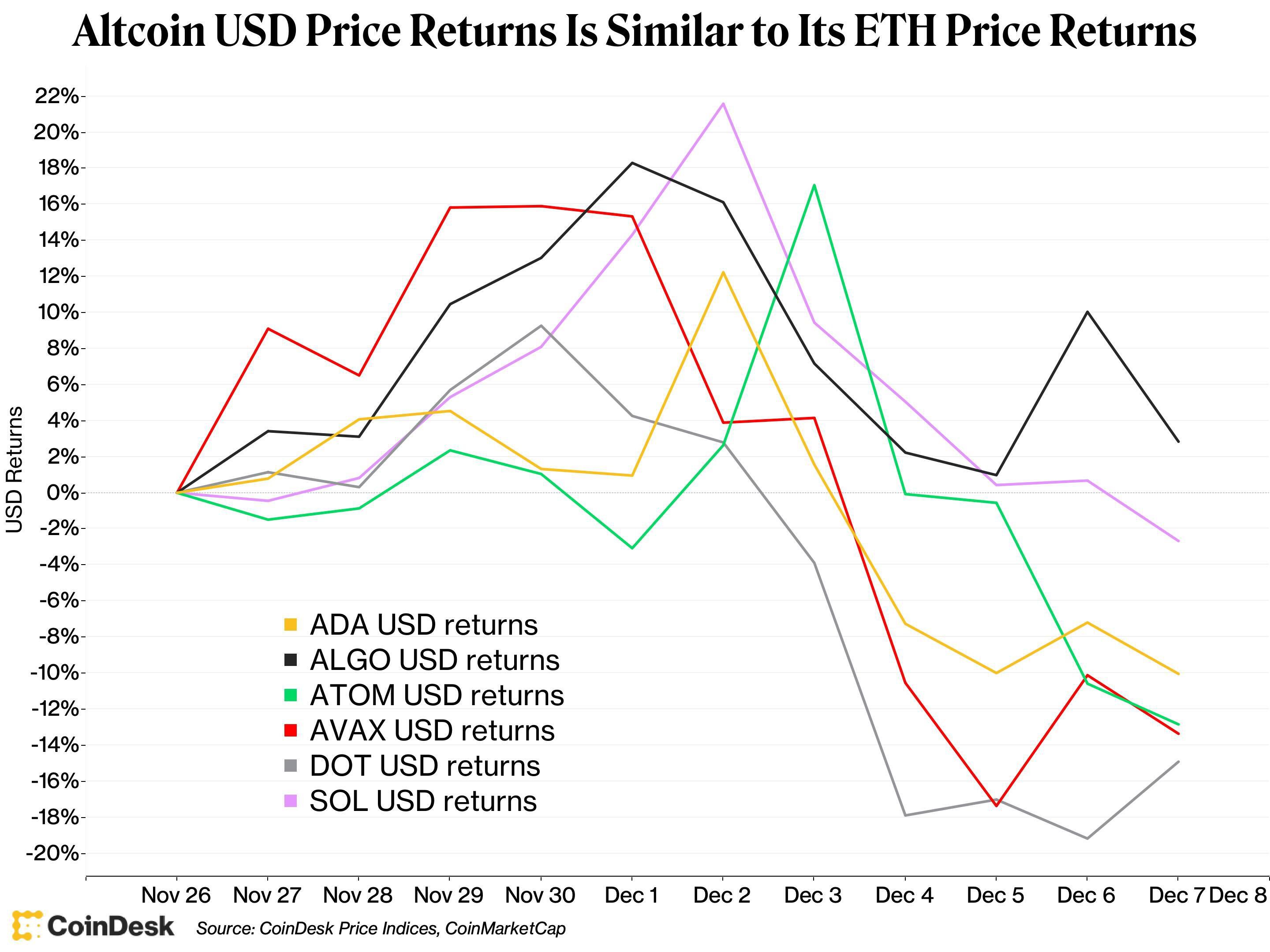 And none of the six on our list of the major layer 1 altcoins generated positive returns when priced in ETH over the past couple of weeks, meaning they have underperformed it. 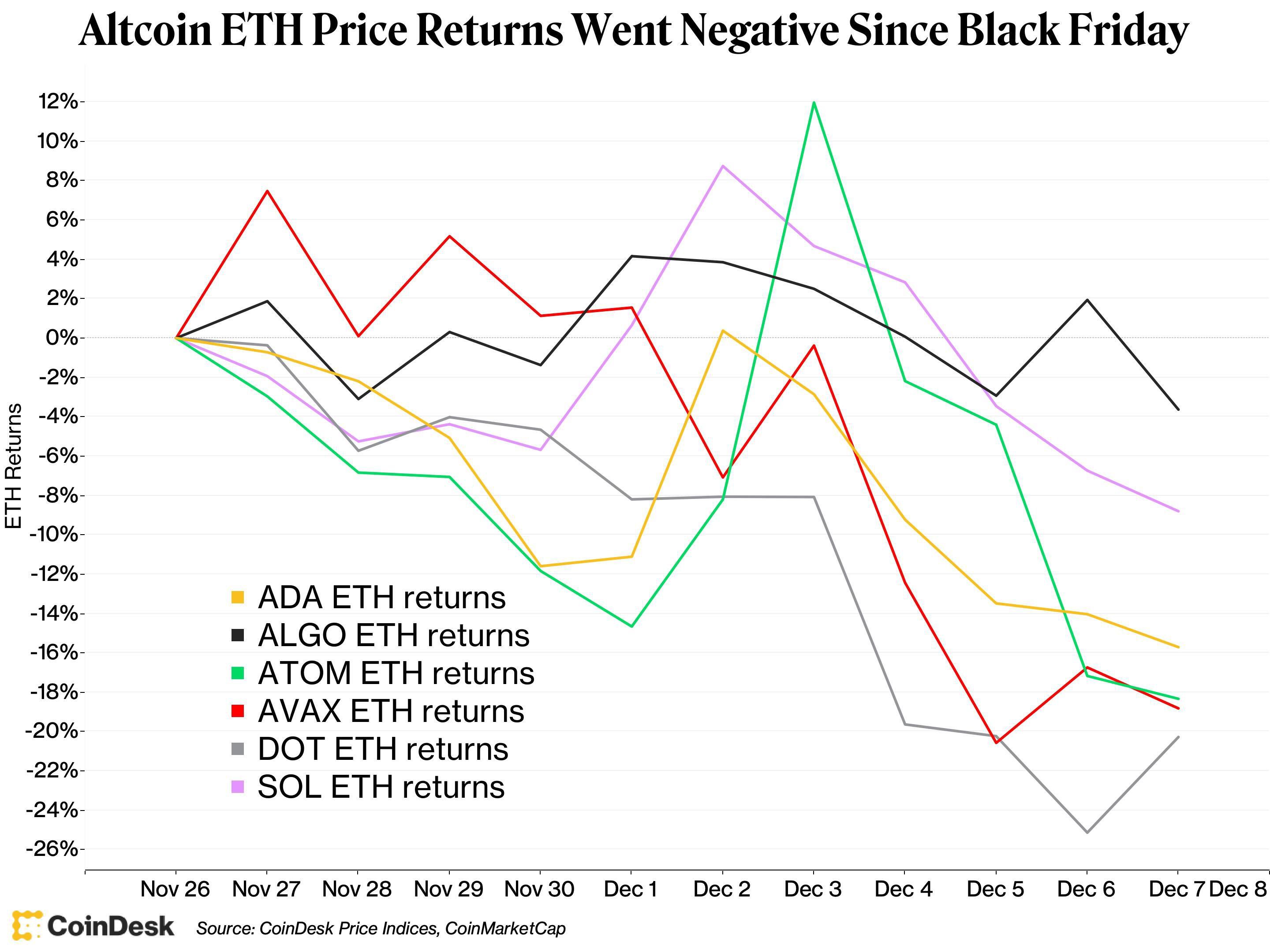 The coming year may see the layer 1 tokens outperform, according to John Wu, president of technology firm Ava Labs, which created the Avalanche blockchain. He sees the perception of added utility as helping to drive prices higher this coming year.

“I think going forward in 2022, that trend of correlation between and outperformance of price –

or market cap with – utility and the growth of adoption of certain chains is going to continue,” Wu told CoinDesk’s “First Mover” TV program on Thursday. “Now, if the whole market goes down for tapering reasons or for whatever, you’re going to see outperformance from the layer 1s because the layer 1s are basically the best way to play the overall utility in this space.”

However, the big layer 1 players may not outperform ether any time soon, if technical analyst Katie Stockton, managing partner at analytics firm Fairlead Strategies, is correct.

Stockton created two relative rotation graphs, which measure one asset’s performance against another based on relative strength and relative momentum.

“They show trailing history for each coin, normalized relative to ether, which is represented by the graph’s crosshairs,” she explained in an email to CoinDesk. “The graph maintains a clockwise motion, with outperformance coming from coins pointing up-and-to-the-right, and vice versa. The X axis measures relative strength, and the Y axis measures momentum of that relative strength.”

(To those wanting a detailed look at how to calculate this, here’s a nifty guide.)

In the short term, five of the six alternative layer 1 tokens have been lagging ether. Solana’s SOL is the exception. 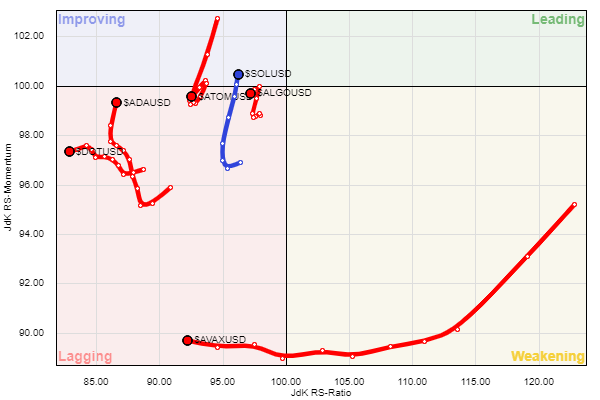 On a longer-term basis, ALGO, Avalanche’s AVAX, Cosmos’ ATOM and SOL are all weakening and heading toward the “lagging” quadrant, where Cardano’s ASA is now. Polkadot’s DOT, which is the only one currently leading ether, is only barely doing so and appears ready to fall into the “weakening” quadrant. 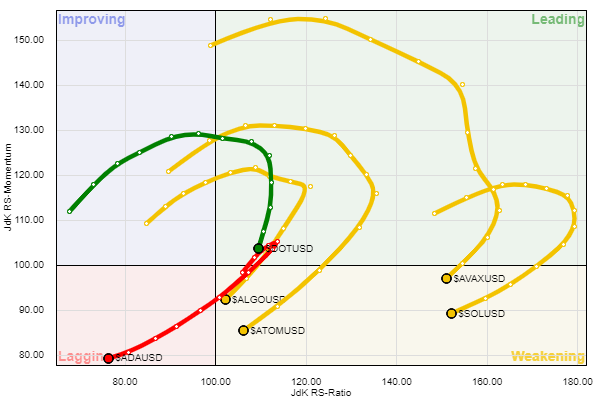 “The short-term one shows less potential for near-term outperformance versus ether,” Stockton said.

Will that indeed be the case? It may depend on large investors, who are currently getting their feet wet in crypto. As their sophistication beyond bitcoin grows, they may take their first baby steps into ether, causing the second-most valuable cryptocurrency by market capitalization to rise relatively higher. Yet as their knowledge further grows — particularly when it comes to Ethereun’s enormous transaction costs — they may subsequently seek alternatives in the other Layer 1 tokens.

Then it’ll be a question of timing, though timing is never easy to predict.